FLOWERS OF THE HUMAN SPIRIT 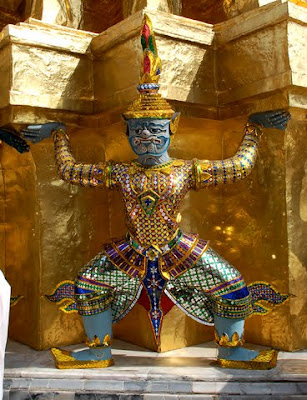 A woman looks up
from her place
among the dirt and pollution
of Silom Road and joins
her palms together in salutation.

Someone has put two one-baht coins
in her plastic cup
(without looking at her face).

One hundred yards away,
The British Club is going to cool
their swimming pool
with ice for a Polar Swim
at 11.00 a.m. on New Year’s Day.
“Free of Charge. Free hot mulled wine.”
(There is a double crash barrier
with uniformed security guards
to protect would-be polar swimmers.)

At the Bangkok Motor Show,
an as-white-as-snow
Bugatti Veyron is à la carte,
escorted by swirling girls
in white satin evening gowns.
253 mph top speed,
turbocharged, all souped-up.
To squeeze out
all its growling sounds,
you will need
to take 165 million baht

out of your plastic cup.

From Bamboo Leaves by Brian Taylor
Posted by Universal Octopus at 19:53 No comments:

Labels: Flowers of the Human Spirit

DANCE OF THE SPIRITS 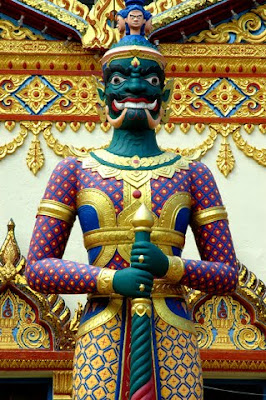 The invitation is in elegant sepia Siamese script
on very pale pink card with embossed borders.
“All disciples and honourable guests
are invited to join
in paying respects
to the Teachers.”
The teachers are unusual though:
Great Teacher Rishi
Grandfather Wealth
His Royal Highness Love Flower
Chao Poh Dhamthamin
Chao Poh the Black and Ruthless
Chao Mère Golden Champa.
All of them are dead
but they will be there
for they are spirits.
His Royal Highness is a son
of King Chulalongkorn
who drowned, when he was ten,
in the sea near Bangsaen.
These spirits are devoted to helping people.

Pranom’s mother had been their medium.
When she died, they moved to Pranom instead.
On Sunday, at the House by the Temple Wall,
breakfast for the monks is at seven,
respects to the Teachers at nine,
lunch at twelve.

Downstairs, under the house,
fifty people are waiting
and excitedly talking.
Are you going up?
“Oh, no. Oh no!”
They laugh.

Upstairs, fourteen mediums,
including Pranom (The Conciliator)
are changing into costumes.
There are six musicians,
with a ranard, two big drums,
one small drum and brass chings.

Along one wall are shelves.
On the top shelf is a large effigy
of Great Teacher Rishi,
hair tied up, long grey beard,
wearing a tiger skin robe.
Under him, tiers of images, mostly male
with some small children.
These are all tutelary spirits
who possess the bodies of the mediums.
The lowest shelf has an elaborate decoration
of banana leaves and flowers.
On the floor, a big smouldering,
clay joss stick holder.
Behind it kong wai (offerings)
of cakes, drinks and fruit.
Along the opposite wall, the monks
have sat, eaten their breakfast,
chanted a mantra bestowing merit
on the donors and departed.
About twenty “disciples and respectable people”
are watching the mediums change.
Pranom is local, the rest from other districts.
One dresses all in red, two in gold.
An old man appears as an Ayudhaya soldier.
He speaks entirely in rhyming verse.
Most are in white, old-fashioned Thai style.
Many are plump and middle-aged.
One girl, all in red, is in her late teens.
She is the medium for Sung Thong
(The Golden Conch Shell). *

Pranom begins. She takes one joss stick
and concentrates her attention on it.
The musicians play, two of them chant
mantras which evoke spirits.
Pranom is sitting cross-legged.
She starts to sway round and round
violently and erratically
like an unbalanced top.
She stops swaying and sits erect
before jumping eighteen inches straight up
and falling back on her plump
haunches with a great thump.
She is fat and bounces,
bang, bang, bang.
Her movements get wilder
as the musicians play louder
until she flops down on her face.
Great Teacher Rishi has arrived.
She takes seven candles,
holds them tightly together and lights them.
The flames flare up like a great torch
which she plunges into her mouth.
This is the signal
for the other mediums.
They sway demonically,
bounce incredibly
high on their middle-aged haunches,
and finally flop forwards or backwards
when the spirits come.
They light candles. They swallow flames.
All the joss sticks in the clay pot are alight
and, with the candle smoke,
create a thick haze in which the mediums
dance round the room
in time to the boom-boom
of the musicians,
stopping every few steps
to pay respects to each other.
The crashing, the banging, the noise
confirm the fears of all those beneath the floor
who had not dared to come up
but could not bear to keep away.

Pranom receives the first believer,
an old man with a half-crazed look.
Great Teacher Rishi’s voice grates out,
“You cut trees down didn’t you?”
The man nods humbly.
“Don’t you know that in those trees
there were devas?
That’s why they’ve made you mad.
You saw two men standing there, didn’t you?”
“Yes.”
“Get them a spirit house.
Then you will be all right.”

A big man, from another province, is next.
“You got what you wanted, didn’t you?
Boss of the Coca Cola Company
in Rayong now, aren’t you?”
The man smiles and bows.

Suddenly, one of the mediums
calls out that the Cripple is coming.
She crouches and writhes
(and swallows fire.)
The other mediums come and pay their respects.

All the mediums are receiving devotees
But the music is so loud
it is impossible to hear what is said.

By now the Prince
has replaced the Rishi in Pranom.
she comes over and a child’s voice asks,
“When are you going back?”
I don’t know.
“You have an advantage over lots of people,
living in two countries.
May you be well, happy and rich.”

After two-and-a-half hours,
the spirits leave.
The mediums start to change
into ordinary clothes.
We go over to a warrior in red,
an attractive girl in her mid-twenties.
She is smoking
two cigarettes at once
which she is holding
between the index
and middle fingers of one hand.

How does it feel?

“That is too broad a question.
Be more specific.”

“Many: Brahma, Siva, Naraya.
Our purpose is giving
without expecting anything in return.
Give with the giving heart.
To do this you need
to be well established
in morality and Dhamma.
Those who drink alcohol and smoke
cigarettes are not wrong.”
Really?
No answer.

We went downstairs.
Lunch was beginning.
On our way out,
we were given five bags
of food and fruit.

At half past four,
lunch was still being eaten.
Late in the evening,
music could still be heard.
* In Indian Legend, a Queen gave birth to a conch shell. The king's minor wife was jealous of this and bribed the court astrologer to say it was a bad omen. It was banished by being thrown into the river. Later, a Prince emerged from it who, after many adventures, became king himself and ruled wisely and justly. The story is told in a Thai poem written by King Rama ll.

From Bamboo Leaves by Brian Taylor
Posted by Universal Octopus at 19:42 No comments: