Khun’s house stands impermanently
by a large and ancient Bodhi tree.
This has lent him its shade
since the house was first made
and has spread its branches comfortably.
Under such a tree was Buddha enlightened.
Hundreds of birds come here
to nest,
to rest,
to watch the night fade
and the dark sun appear.
Khun has heard of chicken flu.
Seeing all those birds, he fears
that he might catch it too.
He drew the Council’s attention to it.
He wanted the tree cut down
and the Council to do it.
The Council refused,
said no, declined, demurred.
But Khun was not so easily deterred
and hired a local man to do it for him.
But first he knelt down on the ground
(Suchit saw him).
He put his hands together
in a gesture of submission
and asked the Bodhi tree’s permission.

I do not know
what the tree had to say
but I do know
it was chopped the very same day.

Opposite Wat Krathum,
a large and ancient banyan tree
has been blown down by the wind.
A Medium says the deva
has been complaining it is homeless.
On Sunday the old Headmaster (eighty three)
announced in the Temple
that local people had collected
seven thousand baht
for a large Spirit House to be erected
next to the stump.

(Note: In Buddhist Southeast Asia it is not unusual for tree devas to be seen, resulting in a large, red, green or yellow muslin-type cloth being wrapped round the trunk of the particular tree, to indicate that it should not be cut down. Offerings are then made to it (the deva) such as lighted joss sticks, rice and fruit.) 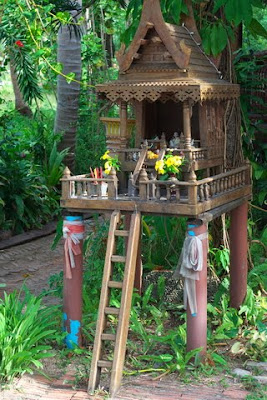 Last evening a heavy crunching
on the gravel drive
between here and the river.
Ang and Dek are dragging a spirit house
through a moonless night.

What are you doing?

“Can we throw this
into the river in front of your house?”

“It is empty. Manit has bought a new one.”

Why bring it here?

“We can’t leave it by the road.
Bad spirits move into empty houses
by the road and cause accidents.”

Drop it in the river by your house.

“The bank is wrong.
It goes straight down.
Here the bank slopes.
It will slide down.
The river devas will take care of it.
There will be no danger.”

Tong Dee is thin
wears a yellow shirt,
has short hair.
However she puts her body,
it is uncomfortable.
For six weeks she has been a medium.
When she speaks,
it is with the voice of a spirit drifting
between death and rebirth,
trying to communicate with the living,
grasping at mother earth
with de-atomizing fingers.

It is making Tong Dee ill and thin.
Wek, her grandmother,
has invited a great Deva
to stop the spirits getting in.

Today, Tong Dee’s mouth complained,
“They have taken my house.
I have nowhere to go.”

“Ah Koh Lai was my Grandmother.
She was a great devotee
and kept back the best
fruit for the alms round.
She hoarded up her money for the Temple.
When the rice plants
were pregnant with milk
in the young grains,
she would cut strips of plain white cloth.
She dyed them
in turmeric and water.
She tied them
on bamboo poles
and made yellow banners.
She planted one in each rice field.
She stuck a post in the ground
with a plate on top
and piled it with food and fruit.
Then she would light jossticks
and respectfully invite Mère Pho Sop *
to come and receive her offerings.”

Trees calm the brain,
absorb the poison
of its thoughts
and return them
clean again.

Gong is the Land Guardian
of this place.
Old Chinese face,
Chinese hanging shorts,
pointed Chinese hat
of palm leaf and bamboo frame.
He sits with his back to the river
by the tumbledown remains
of his spirit house,
which has endured all of thirty years.

From ‘Bamboo Leaves’ by Brian Taylor

Posted by Universal Octopus at 19:33