THE DYING RACES OF MANKIND 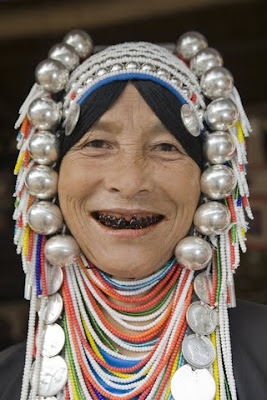 When the rich see the very poor

they know it is time
to buy their valuables.
Cheaply.

This ancient people
were driven out of Tibet
by the Tibetans,
out of China by the Chinese
and out of Burma
by the Burmese.

Ah Kah people are very poor
and cannot offer much resistance
to economic assistance.
They make exquisite silver jewellery
and headdresses.
Treasure hunters
have been buying them.
Cheaply.

Although the missionaries,
have been taught
that moth and rust doth corrupt
and thieves break in and steal,
they courageously bite the moral bullet
and seek treasures on earth as well.

Ah Kah are animists
and see all around them spirits
and the ghosts of their ancestors.
Their villages are small,
their houses bamboo
and on stilts.
They are accustomed
to having to abandon them
and move on.

Outside each village
is a ceremonial swing
on three poles.
Smaller than the Giant Brahmin Swing,
it serves the same purpose;
to gently dislodge the jiva
from the physical manipura
and reawaken the old self-knowledge.

The Headman reawakens
the old tribal-knowledge.
He can recite the names of the ancestors
back to the Beginning.

Carefully carrying
this self-knowledge
and this tribal-knowledge,
carefully preserving
this family identity,
they have wandered on
like Bronze Age tribes.

Like the Israelites,
who recited their ancestral names
in the Generation of Adam;And Adam begat Seth
and Seth begat Enos
and Enos begat Cainan
and Cainan begat Mahalaleel
and Cainan lived eight hundred and forty years
after he begat Mahalaleel…

Like the Ashokhs in Transcaucasia,
reciting the story of Gilgamesh.

All these are Inheritors.

The missionaries have already bought
twenty five percent of the Ah Kah souls
in these rolling green hills.
The Spiritual Inheritance of Ah Kah
is bought with running water,
fertilizers and televisions,
radios and motorbikes,
pharmaceutical drugs and jobs
and education for the next generation.

In this village there are two brick buildings,
the priest’s house and a Church.
Despite this, the recitations still go on,
as does haruspication
from the entrails of black pigs.

Further down the valley to the east,
that large white building
is where the children eat and sleep;
and are schooled in virtues

of the neverland of western industrial society
and its sanitized philosophies.

From Bamboo Leaves by Brian Taylor
Posted by Universal Octopus at 19:48

Labels: The Dying Races of Mankind